Welcome to the official site of Shawn Massachusetts Hansen 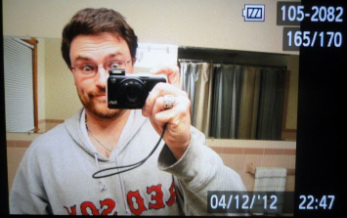 HELLO, and WELCOME to the ''official'' website of Shawn Hansen. I guess to make it look authentic I put the word ''official'' in not only quotes, but bold font as well.

ANYWAYS - I would like to thank YOU (the reader, or fan if there is such a thing as a Shawn Hansen Fan) for visiting my website to indulge yourself in as I call it (The World of Shawn).  Listed above this 'home page' are various links that migrate to other parts of this site that displays different information then what you are currently reading. 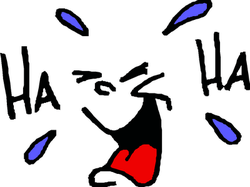 Interviewing Comedian Dave Russo: I told him he deserved being on Comics Come Home in 2011 because he is really talented. Russo said, "Thank you, Shawn. Right back at yah." I then said, "How much did you get paid to say that?" Russo replied, "It's funny, they actually sent me a gift card, and I ended up getting a new iPad with it."

Why go by the name Shawn Massachusetts Hansen?

Good story. On April 19, 2012 I realized that since there are multiple Shawn Hansen's in the United States of America, and wherever else in the World they live (because Shawn Hansen is a popular name) I should create a way to stand out from the other Shawn Hansen's. To not confuse people of which Shawn Hansen I am, why not throw in the state's name that I grew up in as my middle name? ... That, and the fact that my middle name actually starts with the letter-M fit very well.

This is a picture of myself with "Pizza Man." 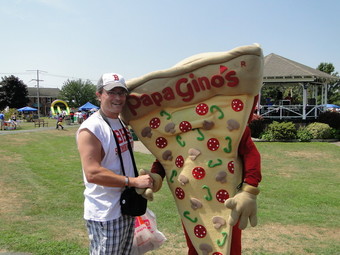 I didn't get to interview Pizza Man, but is he a superhero of Papa Ginos?  If he is does he team up with a Dominoes pizza, Papa Johns pizza, and whatever other pizza there is out there to fight crime when everyone is fast asleep???

Who do YOU think would win in a fight IF different pizzas do not get along because they are from different venues?

Pappa Ginos, Dominoes, Papa Johns, Londi's, Pizza Mia, Sals, Pizza Regina, Halftime Pizza. I can't think of any other pizza places that could have Pizza Superheroes such as Pizza Man who works at Papa Gino's that I am pictured with to the Left, but all in all I think I am pretty much asking YOU what your favorite pizza place is.

Washing your hands is important! 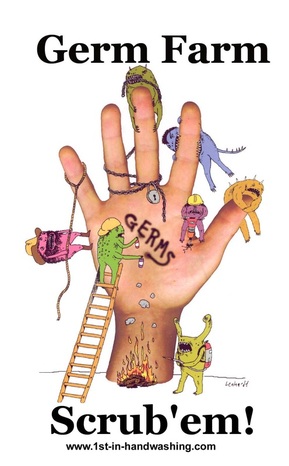 Washing your hands is not only important, but is very important because germs are collected easily from ones hands. As Peyton Harris closed the door to his car, entering a building by reaching out to grab the handle of the door to swing it open, and then shake Pedro DeMarkio's hand who greeted him at the door is a story of how Harris collected germs THREE different ways!

(1) Peyton Harris closed his car door. Even though the car belongs to Peyton it still carries germs.
(2) Touching a handle to a door is COVERED with germs because HOW MANY PEOPLE are touching that same exact handle to go in, and out of that building day by day?
(3) Shaking DeMarkio's hand will cause germs to jump from his hand to your hand, and vice versa.

The moral of this story is to WASH YOUR HANDS! The point of this story was to tell YOU (the reader or fan, which I'm still wondering if there are law restrictions against becoming a Shawn Hansen Fan) about sinks with timers.

Going to wash my hands after nature called at H-Mart in Burlington, I 'attempted' to wash my hands as I pushed the handle of the faucet down as BOOM, right when I put my hands in place to 'wash my hands' the water shut off. I tried this a few more times, and finally was able to finish washing my hands after the TENTH attempt, and then figured to use the Stop Watch on my phone to time how fast they allowed you to potentially wash your hands. ... Not making this up, the time was 2.56-seconds!!!!

As I went to D'Angelo's the other day, I timed the timer of how fast they let you wash your hands, and it came out to a whopping time of 17.17-seconds. ... (1) I was able to wash my hands with SPARE time running on the clock at D'Angelo's, (2) This was a VACATION compared to the 2.56-seconds H-Mart gave me to wash my hands, and (3) You may want to play the number 17 the next time you buy a mega million dollar scratch ticket.